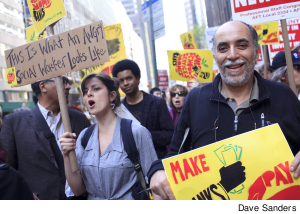 After being fired from his position as director of Brooklyn College’s Graduate Center for Workers Education (GCWE) for alleged financial and ethical wrongdoings, Professor Joseph Wilson is suing CUNY for $20 million in damages to his personal and professional reputation.

The lawsuit, filed on January 5th in the U.S. District Court in Brooklyn, asserts that Wilson is “the victim of the most vicious campaign of defamation, vilification and abuse ever meted out to a tenured professor in a public institution.”

Wilson is seeking compensation for “the loss of income and benefits, loss of job opportunities, the loss of reputation and professional integrity; the humiliation, embarrassment, mental and emotional pain and suffering; loss of love, affection and consortium of spouse, offspring and family members.”

In an internal investigation carried out by CUNY in 2011, officials accused the 63-year-old tenured political science professor of stealing thousands of dollars of tuition money, knowingly allowing his students to plagiarize, renting out rooms in the graduate center without the consent of the university and misusing grant money, according to the filing.

A CUNY spokesperson declined to comment, saying that the university does not discuss personnel matters.

According to Wilson’s lawyer, Colin Moore, the administration then looked to the New York State Attorney General to bring criminal charges against Wilson.

An AG spokesperson confirmed the investigation to a Kingsman reporter in 2013 and witnesses at the GCWE are said to have seen members of the AG’s office take over rooms at the center to question faculty and examine documents.

“The Attorney General found that the allegations lacked legal merit and dropped the charges,” the lawsuit says. “Dismayed by its failure to obtain criminal charges, the Brooklyn College administration filed disciplinary charges against Plaintiff [Wilson].”

The lawsuit states that the AG has not indicted Wilson and has never called him in for interviews or questioning.

Wilson was then fired from his position as director of GCWE and after testifying before the joint Higher Education and Civil Rights Committee at City Hall in 2013, he was barred from returning to the Brooklyn College campus.

He told the committee that “the cancer of racism permeates the City University of New York. It is hidden, obfuscated, rationalized and never confronted directly either in faculty hiring or segregated student services,” according to the lawsuit.

Wilson, while still technically employed by Brooklyn College as a tenured professor, is currently on a forced administrative leave awaiting the outcome of the disciplinary charges leveled by the college.